Revolutionary Block on the Lenin-Liebknecht-Luxemburg Manifestation 2017!

Hunger, war and fascism terrorize many parts of the world. This has initiated the biggest wave of flight since the second world war. The capitalistic exploitation of human and nature for maximum profit is carried to the extreme, the crisis of the EU and in ever more states after all, the confrontation between various imperialistic countries has exacerbated since the break out of the world economic crisis in 2008. The exacerbated competition is also background for “free trade agreements” hated by the masses. With the war in Syria and Ukraine the imperialists also decide their competition military and evoke the danger of a III. World War.

The crisis of capitalism was “globalized” with its economy. This has created such a package of social cuts, devastation of war, environmental catastrophes and mass unemployment, that the only answer had to be a wave of strengthening the resistance of the billions of workers and suppressed as well as spreading of progressive and socialist ideas and spirit. This puts up great tasks for us:

Let’s make year 2017 into a year of resistance:

Whether at the federal- and state elections, at the G20 summit in Hamburg, the United Nations Climate Change Conference, the collective bargaining round and daily in enterprise, school, university.

From Wall Street to Acropolis, from Taksim-Square in Istanbul to Tahrir-Square in Cairo, from Kurdistan to Germany, the world experiences a chain of demonstrations, mass actions and up-risings. In Paris more than one million people demonstrate in 2016 against the French version of the “Agenda 2010”-cuts, in Germany there was an apex of strikes in 2015, like it wasn’t since 1990. Hundred thousands of people protested against the all-out attack of companies with CETA and TTIP, 10 million people committed themselves voluntary and in solidarity with the masses who fled here. Evermore people are looking for a fundamental alternative to capitalism, millions of people become aware:

In the bourgeois democracy the biggest banks and companies rule in the end. The economic elites, the billionaires and managers not only control resources, food and the international production chains, but also have hundreds of connections into the bourgeois parties and the state. With manifold methods the leadership of the biggest international banks and companies is established, in which the profit of an ever smaller elite is in the centre. The remainder of humanity is allowed to put a cross all few years.

We need a system which is democratic in a new way. In which our representatives cannot enrich themselves at the cost of the whole society, must give account and can be deselect every time. It is time, that us, the people who make the riches and profits of society possible, also decide, what happens with it and shape all areas of society: From feeding of humanity to care of the old and ill onto the receipt of environment as well as future generations.

A world in control by the workers, without exploitation, poverty, suppression and war is possible. In this country more and more people are receptive for such real socialist ideas also especially in the youth. Nearly half of all Germans thinks: “Socialism/Communism is a good idea, which was only implemented falsely.” 45% of Germans are basically open-minded for socialism, while only 26% are warmed up for capitalism..

Against this trend to the left stands a dangerous swing to the right, emanating from the governments. Around the world right parties and movements have grown stronger since the economic crisis – Donald Trump becomes president of the USA, thereto comes the current process of establishment of a fascist dictator ship by Erdogan in the NATO-state Turkey and the German government also swings to the right: The SPD-CDU-Government does not only support fascist in the Ukraine and Saudi-Arabia with money and weapons. Chancellor Merkel has also concluded a tight pact with the fascist dictator Erdogan and the other EU-states, which seals the EU even more against refugees.

Against the swing to the right we have to team up! We are youth organisations, which are part of the newly founded “Internationalistic Alliance”. In the Internationalistic Alliance internationalist, class militant, anti fascist and revolutionary forces especially from the workers, women, youth and environmental movement have teamed up. In times of eminent attacks be the government and the fascists against refugees, against the left and as well the Kurdish movement or freedom we call onto every antifascist, progressive and revolutionary forces for a resolute answer. In our point of views we have to overcome the split of the revolutionary movement and work together in the issues we are agreed on.

You cannot overthrow the German state with many needle-points: It comes down to creating a superior force. Every left group, organisation and party again has its special strengths and experiences, it can contribute. This way a collaboration based on conviction arises in practical rebellion and as mutual learning process. By now we discuss the idea of forming a youth platform in the Internationalistic Alliance to strengthen the rebellion of the youth sustained.

For the upcoming state and federal elections the Alliance will stand as “Internationalistic Ticket/MLPD”. Alliance candidacies aren’t allowed in the reactionary German electoral law and we welcome that the MLPD has opened its Ticket therefore. Not because we have the slightest illusions into bourgeois elections but in the spirit of Karl Liebknecht who used his Reichtstags seat as a stage for the struggle against the World War I.

For the 98. time thousands of people take the streets of Berlin on 14./15. of January 2017, the day of dead of the communists Karl Liebknechts and Rosa Luxemburgs. Also it is the 100th anniversary of the Red October, the first socialist revolution in the history of mankind. Many think, the LLL-Manifestation is only a “left maintenance of tradition” or a funeral march. To us it is much more: The spark of the October Revolution, which lit a beacon in the revolutionary movement all over the world, has not defunct until today… The historic achievement of this successful revolution cannot be taken – also the first attempt to create a world without exploitation and suppression was betrayed. But we will learn from this experience. We don’t celebrate this anniversary out of nostalgia, but because it is an incentive for us – building up on this experience – to be even more successful on the next try!

The LLL as biggest manifestation for socialism in Europe is alive – against all rabble-rousing and splitting manoeuvres!

In tradition of the Red October and also the November Revolution in Germany we take to the streets for this prospect! A socialist society in the 21st century is possible – and urgently needed! 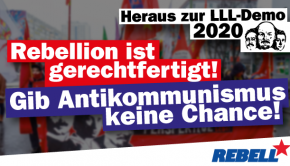 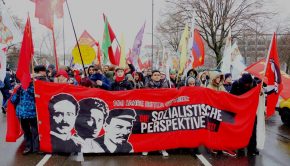